The so-called Lion Temple is situated about 600 m southeast of the Great Enclosure. It is a typical Meroitic one-roomed temple, dedicated to the lion god Apedemak, an indigenous Kushite god. Constructed under king Arnakhamani (c. 235–218 BC), it is one of the most important monuments of the Early Meroitic Period and about 200 years older than the Lion Temple in Naga which seems to have been modelled after its predecessor in Musawwarat.

The front of the temple is designed as a pylon, following Egyptian architect­ural models. The reliefs on the outer sidewalls of the temple depict king Arnakhamani and a prince, protected by the goddess Isis, venerating a succession of deities – six gods on the southern wall, four divine couples on the northern wall. The outer back wall shows Arnakhamani in front of the gods Apedemak and Sebiumeker. All of the representations are accompanied by inscriptions, which give the names of the royal persons and the deities as well as short hymns to the latter. These texts are related to early Ptolemaic inscriptions on the temple of Isis on Philae above the First Cataract, the southernmost temple in Egyptian core territory. The reliefs on the interior walls of the Lion Temple are in a more fragmentary state. They comprise more complex, small-scaled scenes with a closer relationship to the cult practices in the temple.

The Lion Temple at Musawwarat is an important testimony to seminal changes in Kushite society and religion in the 4th and 3rd centuries BC. In the Napatan period (c. 650–300 BC), the Kushite pantheon – at least as represented in official sources – is exclusively composed of gods with an origin in Pharaonic Egypt, such as Amun-Ra. Non-Egyptian ‘indigenous’ deities only appear in the subsequent Meroitic period (c. 300 BC–350 AD). The Apedemak Temple at Musawwarat is a manifestation of this development: The gods Apedemak, Sebiumeker and Arensnuphis are depicted here for the first time.

By its position, the Lion Temple is connected to the Great Hafir, at the foot of which it is situated. The association is a common one: Several ancient hafayir in the region are accompanied by one-roomed temples of presumably Meroitic date. While it has been assumed for a long time that both monuments at Musawwarat are of the same age, recent investigations have proved the Great Hafir to be of Napatan date and considerably older than the Apedemak Temple – which must therefore be understood as a later addition to the assemblage.

The Lion Temple had already collapsed in antiquity, shortly after its construction, possibly due to insufficient foundations. Its decorated sandstone blocks were in an exceptionally good condition, untouched by wind and sand abrasion, when they were excavated in the 1960s. As a result, the temple could be completely re-erected. It received a modern roof and was finally inaugurated in 1970. The roof was renewed in 2015. The temple had been surrounded by a large oval enclosure with an entrance in the southeast in antiquity. The wall visible today at the back of the temple is a modern protective measure to shield the temple from wind and sand abrasion. Its outline does not follow the ancient enclosure wall. 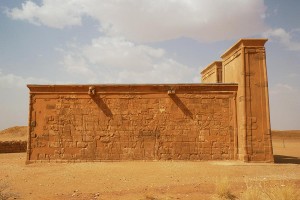 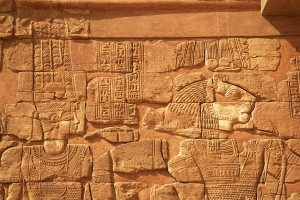 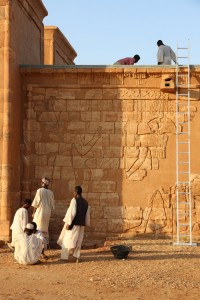