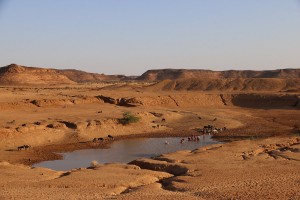 Because of its sheer size, at first glance, the Great Hafir is hardly recognisable as a man-made structure. But what seems like a huge earth mound is in fact the embankment of a large water reservoir, which was built for collecting and storing the waters of Wadi es-Sufra about two and a half millennia ago.

Structurally, the Great Hafir consists of two main components: the reservoir basin with its embankment and a sequence of inlet installations, designed to channel, direct and clear the incoming water. The embankment of the Great Hafir is a landmark at Musawwarat even today – it has a diameter of c. 250 m and still stands up to 8 m high above the surrounding landscape. It is built of alternating layers of stone, gravel and sand, much of which is the upcast of the actual hafir basin, which is enclosed and protected by the embankment. Excavations and geoelectrical measurements have shown the reservoir basin of the Great Hafir to have originally been about 150 m in diameter and about 15 m deep. The volume of the basin has been calculated at an amazing 262,000 m3. In the east the embankment, the hafir has an opening which is flanked by two straight earthworks and constitutes the inner part of the inlet area. The inlet channel, which was a simple dug-out construction and cannot be recognised above ground, was archae­ologically detected to have been c. 85 m long. 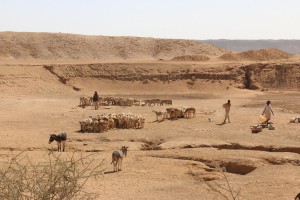 The Great Hafir at Musawwarat is one of four ancient hafayir which have been identified at Musawwarat and its immediate surroundings. It is the largest hafir known in Sudan and the country’s largest archaeological monument. It is also the only hafir which has been archaeologically investigated to date. In Meroitic times, the landscape of Musawwarat can be pictured as a dry savannah. Then, as now, the yearly summer rains were the only available source of water, and the hafayir were the key to effective water management which allowed the development of Musawwarat into a religious centre. Water ducts leading from both the Great and the Small Hafir to the Great Enclosure testify to the use of both reservoirs for the water supply of this monument. 14C-dates indicate that the Great Hafir was built between the 6th and the 4th centuries BC. It is probably the oldest large-scale monument at the site.